Everything you need to know about hosting a 24-hour movie marathon in one convenient book! Third Edition now available for Kindle and in paperback!

Member of The LAMB! 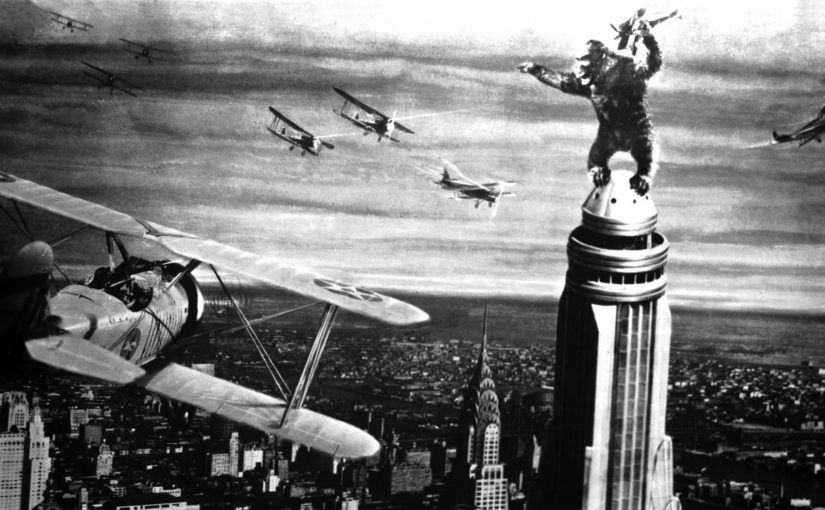 I love movies, and I love sharing great movies with my kids. My kids are all ten years old or younger, and that presents a challenge. They aren’t old enough to appreciate Casablanca or Citizen Kane, and I don’t want them to become budding gangsters by watching The Godfather. So what is a movie-loving parent to do? I have the solution! Classic monster movies for kids!

Many of these classic movies, even those made nearly one-hundred years ago, still have the power to captivate, excite, and provoke deep thoughts. These classic films tell great stories, and are usually straightforward enough not to confuse kids. They have great special effects that are just fake enough not to scare the kids. Bad language is at a minimum. Good always triumphs over evil at the end (although what is evil and what is good can be debatable, even in the movie). They won’t traumatize the kids like more modern horror movies would.

Read on for my list of 1930s-era classic monster movies for kids. As a special treat, you can read what my kids thought about each movie. I was impressed that they remember each movie and had detailed thoughts on each of them.

END_OF_DOCUMENT_TOKEN_TO_BE_REPLACED

Now this is what I’m talking about! A 22-movie, 59-hour Marvel Movie Marathon for the low, low price of $125! That’s less than $6 per movie! You get to see the entire Infinity Saga, ending with the titanic, 3-hour Avengers: Endgame on its premiere night!

The details are a little sketchy. AMC’s official page for the event is here, but doesn’t have many details. It may be hosted in theaters in 11 cities, or maybe it is only 3 cities (New York, Chicago, and San Francisco). It starts on April 23rd and ends on April 26th, but it isn’t clear what time it starts on the 23rd. ButFandango lists it as starting on May 23rd. (c’mon guys! Let’s get organized here!)

Also, it isn’t too clear to me why it runs 59 hours. Watching all 22 films (including Endgame) would take 47 hours and 53 minutes (thank you Movie Marathon Time and your movie time adding abilities!). A half hour break between each film adds 11 hours to the marathon, so perhaps that is where the 59 hour length comes from.

So – if you aren’t the lucky social media influencer selected to get paid to watch all these movies, do the next best thing and pay for it! You are buying in bulk!

And don’t worry – if you can’t make it through all 59 hours – you have Iron Man 2 and Thor: The Dark World to sleep through.

Cabletv.com will pay you $1,000 if you have a marvel movie marathon and tweet about it!

If you watched all of the movies in their lineup back-to-back, that’s a cool 42 hours and 47 minutes. Getting paid $23 an hour to watch movies is a pretty good wage! You also get some additional goodies:

I’m not sure I need all those things, but an Infinity Gauntlet mug does sound pretty badass

I loaded up their lineup into my movie marathon app. The app tells me that if you watched all of these movies back-to-back, this is what your next two days would look like:

Sadly, I don’t think I’m quite cool enough to get the job. You need to be a social media “influencer”.

The hero we’re looking for is not only a Marvel fanatic, but also an active, outgoing social media personality who’d be enthusiastic about live-tweeting their MCU marathon experience while tagging CableTV.com (@CableTV, #CableTV).

And don’t worry… we will let you sleep. The chosen candidate will have three days to complete this epic binge.

What is the challenge in that? Anyone with opposable thumbs can watch some movies and tweet about it. Binge watching them over 42 hours takes real skill!

Ah well – I’ll just have to wait for the next opportunity to get paid to watch movies. I’m sure it’ll come some day. 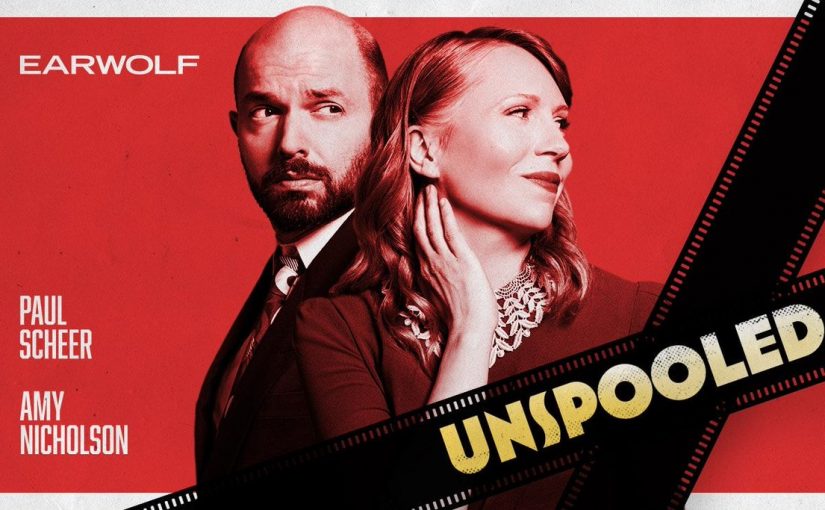 The American Film Institute’s Top 100 movies list has been one of my favorite sources movie marathon ideas for a long time. Now there’s a podcast for that!

The podcast is called Unspooled. The premise is that Paul Scheer and Amy Nicholson watch a movie from the AFI 100 top movies list, and put together a podcast to discuss that movie.

I am a little wary of movie podcasts. Many of the movie podcasts I’ve listened to are a group of bros blathering on too long, making in-jokes, going on unrelated tangents,  and having Skype-level audio quality. That’s not my cup of tea.

Unspooled is different. You can tell Paul and Amy are media professionals. Both of them have credentials on MTV, FX, and other TV and written media. The podcast itself definitely sounds like a professionally produced podcast.

Each episode has the standard discussion of the movie and what they thought about it. But it is not just talking – they also include audio clips from the movie or related media. It is also not just them – they include interviews with high-quality guests with something relevant to say about the movie. Throw in some discussion of the historical context the movie was made in too, and that is a lot of content. This is a podcast I’m going to stick with.

I started with their latest episode All About Eve. I am happy to say I now need to add All About Eve to my next movie marathon! Based on what Paul and Amy say, it contains the perfect blend of witty, fast-paced, cutting 1950’s style dialog that I love from movies like Casablanca and The Big Sleep.

I’ve listened to their episodes on The General and Platoon, and the quality is consistent for each episode.

If you’d like to check them out, you have multiple options: 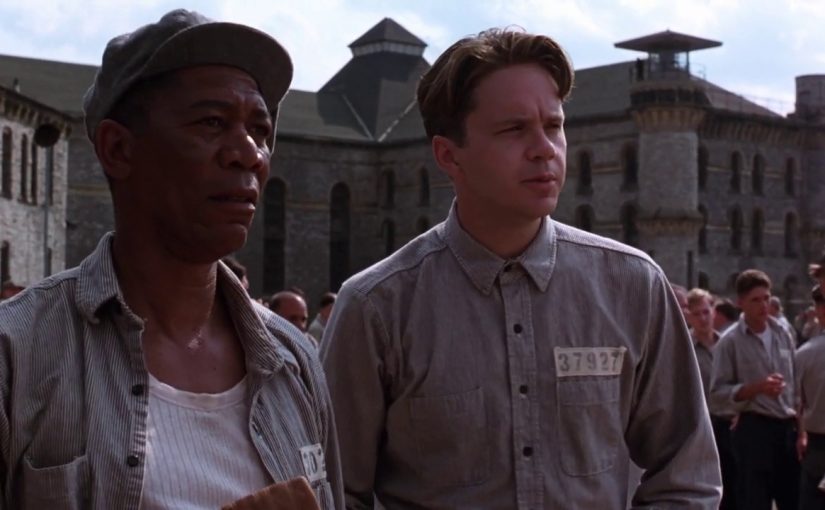 There have been 65 movies based on the writing of Stephen King?? For heaven’s sake, that’s more than the number of novels he has published (56, in case you were wondering). Granted, the 65 movies includes sequels, remakes, and reboots (Children of the Corn 5: Fields of Terror anyone?), but that is still a ridiculous number of movies.

I remember “Stephen King Films” as hokey horror shows like Pet Cemetery or the TV mini-series The Langoliers. But then I found out he wrote The Shawshank Redemption – the film consistently rated as #1 in the IMDB Top 250. While his work definitely tilts towards the thrilling, horrifying, and the supernatural, he has a dramatic range that isn’t immediately clear if you are only familiar with, say, Creepshow.

Why not celebrate his best movie adaptations in a 24-hour Stephen King Movie Marathon? The “best of stephen king” movie lists are pretty consistent on which are the best adaptations out there. You can see the best eleven in 24 hours! 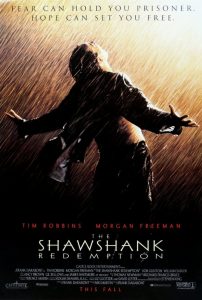 My take: Might as well start with the best! The epic story of wrongful imprisonment, despair, clawing back from the brink, retribution, and finally (may I say it?) redemption. Features Morgan Freeman, the undisputed king of voiceovers, as the narrator. 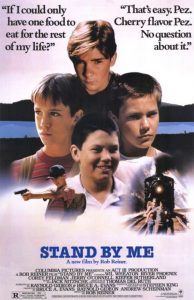 My take: Settle in. At over three hours, this one will take a while. But where else but in a movie marathon will you find the time to watch the famous, critically acclaimed other Stephen King prison drama – the one with psychic powers? 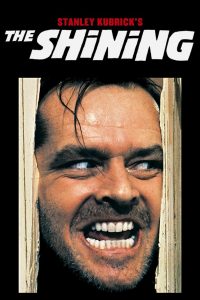 My take: The horror movie like no other horror movie. So “out there”, it was nominated for two Razzie awards, but now is considered one of the best horror films ever. Features Jack Nicholson as a crazy person.

My take: Who hasn’t fantasized making their high school prom a bloodbath of psychic revenge against their childhood enemies? No one? Oh. Forget I said that. 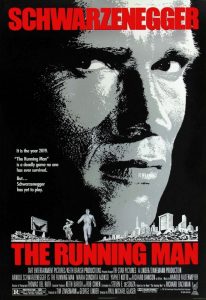 My take: At the midway point of the movie marathon, take a break from endless epicness, bloodsoaked horror, and madness. Instead, go to pure 1980s action with Arnold Schwarzenegger in spandex spouting 80s action one-liners. It’s showtime!

My take: Schoolteacher is granted the power to see visions of the future just by touching someone. This turns out to be a handy skill when trying to avert future deaths and World War 3. I’d advise caution though: time travel and future visions may not be as simple as they seem (see: Hitler Time Travel Exemption, Godwin’s Law of Time Travel) 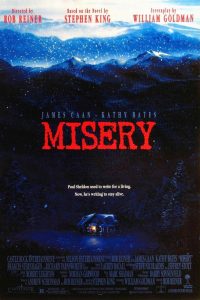 My take: Annie Wilkes is the ultimate fangirl and her favorite author basically just drops right into her lap. What would every fangirl do? Hold him prisoner and make him write fanfiction of course! So true to real life it’s chilling. 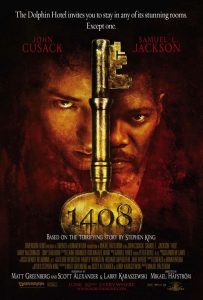 My take: A haunted hotel room that will drive you mad through hallucinations of horror? “Challenge accepted!” says the main character in this film. Wait. Isn’t this The Shining again?

My take: A portrait of people under stress. The stress – giant monsters hiding in mist. The people – infighting and murder. 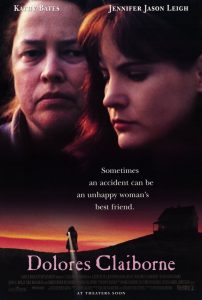 My take: End your Stephen King movie marathon with a good, old-fashioned murder mystery and psychological thriller. Did she do it? Or did she not? Find out!